When our elders reach a certain age or status of health, a tough, but often necessary, a decision has to be made to put them into an assisted living nursing home.

While we make this choice with the best intentions of our elders in mind, nursing homes aren't always what they appear to be on the brochure.

What is Nursing Home Abuse ?

With the number of elder abuse cases rising in Pennsylvania (and across the country), it is important to look at what you can do if your loved one has been the victim of abuse or negligence in their nursing home and where you can find the best nursing home abuse lawyer in PA. Types of Nursing Home Abuse The CDC categorizes elder abuse of individuals age sixty and older by six different types of maltreatment.

Overt and intentional use of force that causes short or long-term illness, impairment, pain, bodily injury or even death

Anything verbal or nonverbal that causes the elder to experience anguish, mental pain, embarrassment or distress. Typical examples include prohibiting access to telephone, transportation or other available resources or intentionally isolating the individual from their family or friends.

The unauthorized use of an elder's money by the caregiver, particularly for the benefit of a person other than the elder. Financial abuse can also include depriving an individual of their right to personal benefits, belongings, assets and other resources they own or are rightfully available to them.

When a caregiver or other responsible individual charged with the care and protection of an elder fails to meet the elder's basic needs for medical attention, nutrition, hygiene, hydration and other essential faculties. Neglect is more severe when it puts the elder at risk of illness, harm or death.

If a caregiver has to terminate their relationship with an elder for any reason, they are required to find a substitute or contact the elders family within a reasonable window of time for them to find a new caregiver. Failure to do so and leaving the elder without care or in a situation/environment where their health and well being is in jeopardy is cause for abandonment.

Not only are these definitions important for identifying when elder abuse has taken place, but they also can help determine the severity and degree of the abuse. With a proper definition of each type of abuse, it is much easier to know when intervention is necessary and when you need to contact a top elder abuse attorney in Philly.

If you currently have a loved one in a nursing home, it can be extremely unnerving to learn that abuse is increasing. Mostly, nursing home abuse rises when there is a lack of available resources, mainly money. When these nursing facilities can't afford to train care attendants or hire the right people, negligence and abuse rise. It becomes easier for abusive behavior to go on unchecked because there isn't enough staff or resources to investigate complaints. For example, a Pennsylvania county saw abuse cases in nursing homes jump 35% during a period of limited financial resources. Additionally, a 2016 report found that between 2013 and 2015, approximately 20% of nursing home deaths that they investigated were caused by avoidable mistakes and acts of negligence. For some of these unfortunate losses, errors were caused by lack of proper training and education and the negligent care was a result of understaffing. Nonetheless, lacking resources didnt stop the national nursing home advocacy group, Families For Better Care, from giving Pennsylvania a failing grade for preventing elderly abuse. In 2015 alone, the state reported 20,000 cases of elder abuse at the nursing home. This reflects an even wider spread problem across the nation, where it is estimated that 10% of people over the age of 60 experience some form of abuse. The problem is exceptionally complex with dementia patients, where almost half are mistreated by their appointed caregivers. In total, there are more cases of elder abuse than child abuse or domestic violence cases.

What Is Being Done To Prevent Abuse In Pennsylvania Nursing Homes?

The news regarding nursing home abuse in Pennsylvania is starting to take a turn for the better, as the state is taking a more active and stricter role in combating these cases. Attorney General Josh Shapiro has begun making efforts to improve the quality of care in nursing homes. In particular, his plan is focused on stopping the financial exploitation and abuse of seniors in nursing homes. By working with banks and fraud agencies, Shapiro hopes to identify cases of financial abuse, even when the victim isnt aware that it is happening or is too afraid to make a claim. Also helping to fight this issue is the Elder Justice Act. This act, signed into law in 2010, has been largely ineffective thus far because of underfunding. However, its budget has recently been doubled, as part of an active effort to ensure this first legislation directed at the issue of elder abuse is a success. With additional funding, the act should be able to ensure better that caregivers are properly trained and that incidents of elder abuse are watched and investigated in a more thorough and timely manner. As a state, the Pennsylvania Department of Aging has set forth a plan to create a standardized training program for all adult protective services investigators. This would help make case consultation on issues regarding neglect, financial exploitation and other examples of elder abuse much more accessible.

What You Can Do to Prevent Nursing Home Abuse in Pennsylvania?

While lawmakers are doing a lot right now to help to avoid nursing home abuse, there's plenty you can do as well. Identifying some of the early warning signs of nursing home abuse could save your loved one a lot of strife, especially if they are too embarrassed to bring attention to their case or incapable of correctly identifying abuse. It isn't going to be obvious, but there are some subtle signs, such as:

The more you know what to look for, the easier the warning signs will be to spot and the quicker youll be able to put a stop to the abuse. If you believe your loved one is experiencing any nursing home abuse, no matter how severe, your first course of action is to contact the Pennsylvania Department of Aging. They have a statewide hotline (1.800.490.8505) where a trained agent will listen to your scenario as you explain the type of abuse you feel you witnessed. In cases where the abuse is criminal, they will take the necessary steps to notify law enforcement of the situation. This is the fastest way to prevent further harm to the victim and get them the immediate help that they need. Once the case has been reported, then you want to seek the help of the best nursing home abuse attorney in Pennsylvania. Because of the different types of elder abuses and how vastly they can differ in severity, these cases typically result in one of three proceedings:

In civil action cases and protective services investigations, the responsible or at-fault party isn't always the perpetrator of the abuser him/herself. Often the responsibility falls on the shoulders of the senior care facility or organization that hired the individual and didn't adequately monitor their behavior or screen them during the interview process. With the best elder abuse lawyer in Philly on your side, identifying the correct responsible party and recovering the damages you are owed is much less stressful.

What Should I do If I Suspect That A Relitive is a Victim of Nursing Home Abuse?

Don't let elder abuse persist in Pennsylvania. If you have any feelings that you, a loved one or someone you know may be a victim of abuse in their nursing home, take the necessary steps to get that person out of harms way by contacting the Pennsylvania Department of Aging. Then, seek out the help of a top PA elder abuse lawyer specializing in nursing home cases. 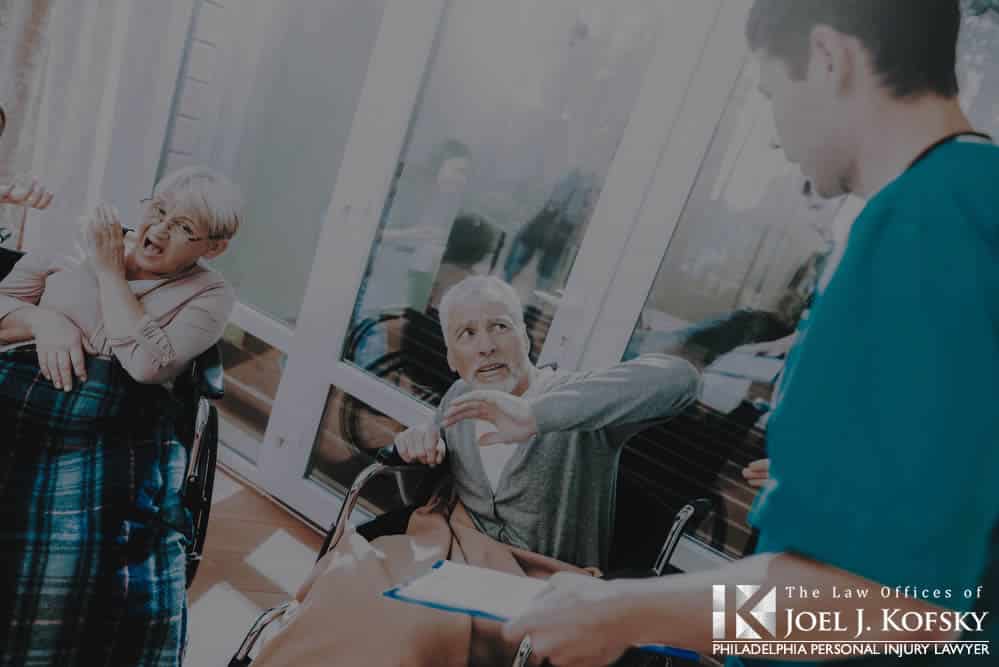 Nursing home abuse is classified into six different areas of maltreatment on elders.

I was very grateful for the hard work Joel did on my case. And 9 years later, to my surprise, I received a call from his office alerting me that I would be receiving another check from the defendant. Hopefully I won’t need his services again, but if I do, I’ll be calling Joel Kofsky

Harvey G.
The office and every one was working on my case simply great and have done awesome job
Elena M.
Great team! I was given attention by many staff members, and everything was taken care of in a very timely manner, Always responding quickly to my calls ,...Mirna was Great!
Tina W.
Find us on Facebook
Find Us on Google
Find us on Twitter